‘I can sleep at night now’: iCare buys 19 homes to save families from eviction 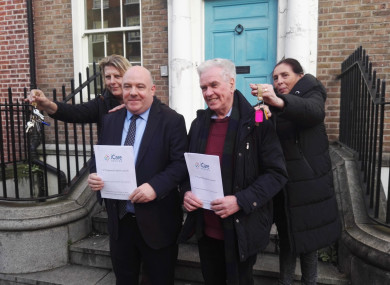 AN APPROVED HOUSING body that purchases distressed mortgages from banks and allows the former owners to remain as tenants bought 19 homes in its first year.

iCare Housing was set up by David Hall, CEO of Irish Mortgage Holders Organisation, in September 2017. Today the organisation confirmed that 19 properties, home to 46 individuals, had been purchased.

A further 571 deals have been made with banks – and some vulture funds – to purchase homes so the former owners can live in them and pay rent as social housing tenants.

One of the 19 already purchased homes is that of Anna Gallagher.

Speaking to TheJournal.ie today, she said her family began having problems meeting mortgage payments in 2009. The following year her husband took his own life.

“After his death, it continued on for me until 2018. I met David [Hall] in 2010, he took me on to talk to me and see what way he could help me out with the letters. But it took eight years to get here.

“We became good friends, he helped me through it all, though he never said he could save my my home, never led me on about it.”

She said she would not have been able to face going through the courts to keep her home.I was willing to just give it all up – I didn’t know where I was going to go, but I wouldn’t have wanted to prolong that, that agony.

She said throughout this time she was unable to fully enjoy even the happy times in her life, like the birth of a grandchild.

“I was happy for the kids, but there was no joy in my home. Now I still can’t believe it, but Christmas was great this year I didn’t have to worry about letters. When I see the postman now I’m waving at him, I used to hide when I saw him. But that’s how it affects you, you don’t want to do anything, it’s depression.”I used not to be able to sleep at night, now I can sleep like a baby.

“My marriage broke down and I separated. I was going through the separation and then a divorce so you have the stress of all that, worrying about your kids and you’re worrying about your house. I been dealing with it for six and a half years. She said the bank had sought a possession order on her house.

“It was very scary being in court,” she told TheJournal.ie. She said she has gone through three housing agencies with no success.

“They don’t want the mortgage arrears [properties], they want their own houses, if that’s what they want that’s fine but it makes if very difficult for the likes of us.”

The house was bought by iCare in November 2018.

“It’s just been a dream, iCare have been a dream to deal with. Everything has been transparent. It was like a big Christmas present in November.”

Jane said this is the first Christmas in years she has been able to enjoy “stress free”.

“I was able to smile again.”

When asked whether it bothered them that they no longer own their homes, both women smiled and replied “No”.

iCare said the 19 purchased houses and 571 deals in place represent 2,500 people who can now avoid availing of emergency accommodation. David Hall said he expects the bulk of the other arrangements will progress to purchases in the next 18 to 24 months.

The housing body secured funding from AIB under normal commercial terms and borrowed to purchase the houses. The State funded 30% of the purchase price via a long-term low interest loan. Hall said most of the banks and one of the vulture funds have agreed to discounts on a case by case basis.

Though he said he was “not the biggest fan” of the banks, he said he had to give them credit today. Some 150 of these deals were made with AIB, but he said all of the main banks – and two funds – are engaging.

Fr Peter McVerry also spoke today about the mortgage-to-rent model. He said he welcomes the success, but he said the scheme is too restricted as people have to be eligible for social housing in order to be approved.

He said the government should expand this to include families who fall into the “affordable rent” category, but who earn more than the social housing cut-off.

“This just make so much sense. It’s a huge saving for the State. Every household that becomes homeless is a huge financial burden on the State, as well as the trauma caused by that to the household.”

If you need to talk, support is available:

A list of HSE and HSE-funded services can be found here.